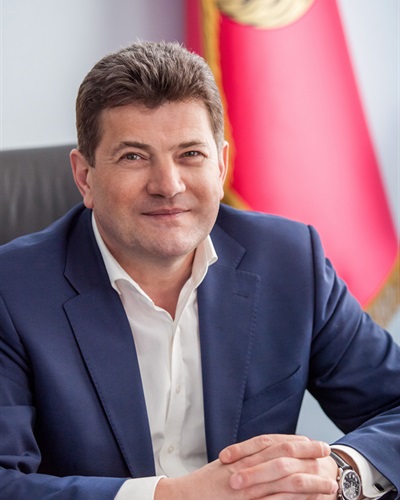 Date of reception according to the city mayor's plan of work

Volodymyr Viktorovych Buryak was born on July 20, 1965, in the village of Kurylivka, Tsarychanskyi district of the Dnipropetrovsk province. A citizen of Ukraine.

Higher education. After graduating from the high school in 1982, V. Buryak entered Dniprodzerzhynsk Industrial Institute, where he studied in the specialty of Metal Treatment Under Pressure, graduated in 1987. In the same 1987, Volodymyr Buryak began his career as an engineer-metallurgist at the Zaporizhstal Metallurgical Industrial Complex.

During 28 years of work at the largest industrial enterprise in Zaporizhzhia, Vladimir Buryak made the labor way from a shift foreman of distributing aggregates treatment to a chief engineer of the plant.

In November 2015 Volodymyr Buryak was dismissed from the post of the chief engineer at his own request in connection with the election to the post of Zaporizhzhya Mayor. On November 25, 2015, he took the oath of the Mayor.

V. Buryak was awarded the Certificate of Appreciation of the Cabinet of Ministers of Ukraine (2008), the "Valorous Labour" Badge of III degree (2010) and the Diploma of the Ministry of Industrial Policy of Ukraine (2013).

Has no criminal record.